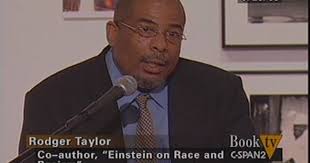 It is with deep sadness that the Reparations Committee shares the news of the passing of Committee member, Rodger Taylor, on Saturday, 25 May. Rodger was a member of St. Augustine’s Church, NYC, and was instrumental in the research and restoration project of the Slave Galleries.
A freelance writer and retired branch librarian with the New York Public Library, Rodger worked on many important works including a newspaper magazine feature titled “Land of the Blacks,” which appeared in New York Newsday, which explored the early African presence in New York shortly after the re-emergence and archaeological study of the African Burial Ground, located in lower Manhattan in the 1990s. In addition, with the late Fred Jerome in 2005, Rodger co-authored Einstein on Race and Racism, which garnered an honorable mention in the Gustavus Myers Outstanding Book Awards. The esteemed Michael Eric Dyson was moved to note: “Thanks to Fred Jerome and Rodger Taylor, we have unimpeachable evidence that the ‘Man of the Century’ wrestled fearlessly and insightfully with what his friend W.E.B. Du Bois termed the century’s greatest problem: the color line. This is one of the year’s most important books.”
A Memorial Service will be held at St. Augustine’s on Sunday, 30 June, time to be confirmed.

During this time of bereavement, we ask that you please keep Rodger’s family in your thoughts and prayers.

Into your hands, O merciful Savior, we commend your servant Rodger. Acknowledge, we humbly beseech you, a sheep of your own fold, a lamb of your own flock, a sinner of your own redeeming. Receive him into the arms of your mercy, into the blessed rest of everlasting peace, and into the glorious company of the saints in light. Amen.

May his soul and the souls of all the departed, through the mercy of God, rest in peace. Amen.

Welcome to our Prayer Circle

Welcome to our virtual praying space. In this tiny sidebar column, we gather in humility to pray together to Jesus and ask God, our Great Physician, to hear and heal us as we go about our work. It is our sacred space to pray together, share our requests for prayer and post prayers for our meditation. Join the Reparations Committee in praying for the people in our diocese during your prayer time, and let us know you are praying with us so we can pray together. Submit your prayer requests on the "Contact us" page or send them by email to diocesanrepcommittee@gmail.com, and the Committee will commit to praying with you.

A Prayer of Thanksgiving

Almighty God of Moses and Hagar, Creator and Redeemer of us All:

We come to you in thanksgiving for your liberating promise of justice where all your children will one day be free;

We offer thanks for the ratification of the Thirteenth Amendment which brought an end of chattel slavery in this land;

We offer thanks for the work of those abolitionists who fought tirelessly to end the sin of chattel slavery remembering especially the too often overlooked Black abolitionists such as Frances Ellen Watkins Harper, Henry Highland Garnet, Sarah Parker Redmond, William Still, and Frederick Douglass;

Grant us, Loving God, forgiveness for our complicity with white supremacy and anti-blackness that gave rise to chattel slavery and continues its legacy in other forms;

Grant us, Liberating God, the moral wisdom, moral leadership, and moral courage to continue the work of freedom, until our world and society becomes a place free from the sins of white supremacy, anti- blackness or anything that would betray the justice that you promise all of your children.

Help us, O God of the disinherited, to be church and thus to lead the way to a world free from the pleas for black lives to matter, because they will matter.

Help us to never be content until that time when heaven has come to earth and all of your children are free to live into the fullness of their created potential. Amen.

We thank you God, for bringing this nation through a devastating civil war, in which the enslavement of people of African heritage played a central role, and served as the catalyst to change hearts and minds in this country to prohibit chattel slavery and the dehumanization of a large faction of your people. We are particularly grateful to commemorate the passage of the 13th Amendment to the U.S. Constitution, which was passed by Congress on the last day of January, 1865  and finally ratified in that same year in early December as the law in this country.  We thank you for the tireless work of people from many nations towards justice, freedom, equity and opportunity for enslaved African-Americans from the inception of this evil institution to the present.  We thank you for giving us courage to honestly face past injustices, grace to repent, and strength to keep on working through and committing to authentic demonstrations of permanent, transformative actions towards a time when all Black lives assuredly matter in this country and throughout your creation.  In Jesus' name, Amen.

God of truth, we acknowledge the pervasive presences of racism in our country’s origins, in our institutions and politics, in our diocese and its churches, and in our hearts. Some of us are much too familiar with racism’s many violent aggressions. Others of us, particularly White Americans, have at times chosen the false comfort of ignorance over the cost and freedom of truth. For this willful disregard and the harm it has caused, we repent. For the many ways — social, economic, and political — that white supremacy has accrued benefits to some of us at the expense of others, we repent. For the ways that racist ideology has bled into all our hearts and corrupted our minds, we repent. In this Year of Apology, grant us courage to pursue your truth and be found by it, to listen and be heard, and to respond ever more faithfully to your call to justice.

O God, we thank you for the privilege and joy of coming together as your children for the work of your Church through its Diocesan Convention. As we reflect on the Year of Lamentation that we have completed together, we thank you for the ability to speak truth seasoned with your grace and love. Give us the courage to see that which we might prefer not to see, and a love for justice that refuses complicity or apathy. Grant us your guidance, and your peace, as we seek to move forward in our journey of reconciliation and repair, ever mindful that as you are the Beloved, so you will draw us to yourself and to each other in Beloved Community. Amen.

Praying with our Diocese and Blessed Absalom Jones

Let us pray together the Collect of the Day, along with the people of the Diocese gathered this morning at the Cathedral of St. John the Divine for the Commemoration of Blessed Absalom Jones:

Set us free, heavenly Father, from every bond of prejudice and fear that, honoring the steadfast courage of your servant Absalom Jones, we may show forth in our lives the reconciling love and true freedom of the children of God, which you have given us in your Son our Savior Jesus Christ; who lives and reigns with you and the Holy Spirit, one God, now and for ever. Amen.

A Collect for the Reverend Dr Martin Luther King, Jr.

Almighty God, by the hand of Moses your servant you led your people out of slavery, and made them free at last: Grant that your Church, following the example of your prophet Martin Luther King, may resist oppression in the name of your love, and may secure for all your children the blessed liberty of the Gospel of Jesus Christ; who lives and reigns with you and the Holy Spirit, one God, now and for ever. Amen.

~ A Great Cloud of Witnesses

January 2018 - Prayer for a New Year, a Year of Lamentation

Emmanuel, as we begin this New Year of Lamentation, we are reminded of the light of the star that guided the wise men to the Baby Jesus, that we celebrate at Epiphany. We begin our Year of Lamentation knowing that you promised and came to be with and among us. The Christmas and Epiphany stories bear witness to your promise. We ask that you be very present with us now, in our time. May your light guide us as we embark, like the wise men before us, in search of Jesus and the reconciliation with God and neighbor that he came to fulfill, and to which he calls us in turn. Amen.

Emmanuel, as we begin this New Year of Lamentation, we are reminded of the light of the star that guided the wise men to the Baby Jesus, that we celebrate at Epiphany. We begin our Year of Lamentation knowing that you promised and came to be with and among us. The Christmas and Epiphany stories bear witness to your promise. We ask that you be very present with us

As we gather for Diocesan Convention, let us pray and reflect together on these words of St. Paul:

“Through Christ (God) reconciled us to himself and gave us the ministry of reconciliation; that is, in Christ God was reconciling the world to himself, not counting their trespasses against them, and entrusting to us the message of reconciliation.” (2 Corinthians 5:18-19)

Loving God, as we come before you seeking reconciliation, we pray that you will give us courageous and tender hearts, to better understand and listen to our neighbor, and to better love our neighbor as ourselves. Amen.